Not too long ago social media was being blown up with cries of anger and injustice. It started with a family taking advantage of the beautiful spring weather and ended with a violent and senseless murder. Some people say it was an accident, others claimed the parents were negligent and caused the death. Phrases like “no choice” and “no other way” were repeated by eyewitnesses. No matter what stance people took, they all agreed it was a tragedy.   Police thoroughly investigated and reviewed the “evidence” including eyewitness accounts and videos. National news was made and journalists were sent from thousands of miles to get the inside scoop. A memorial of stuffed animals and flowers were laid outside of the victim’s home to show the world how much he would be missed. The victim? Harambe, a 17 year old western lowland gorilla. 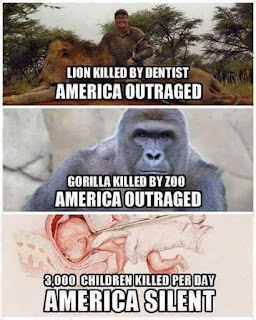 Why is it so easy for America to stand up for animals but so quick to remain silent on the issue of abortion. Why do we as a society mourn the loss of an animal but look away from the 3000 innocent lives murdered each day by abortion?

What is it going to take for us to take a stand for human life? I keep seeing #alllivesmatter all over social media, but do we really feel that way? What are we doing to show women that not only do their lives matter but also how precious the life of their unborn child? I’m not talking about standing outside of abortion clinics screaming obscenities like ‘you are going to hell ’or‘ God hates murderers.’

So many of the women choosing abortion already feel unloved and under-supported.  They don’t need strangers yelling at them.  They need Jesus. They need us to see them through the eyes of our Lord and Savior. These women are yearning for someone to hug them and say, “you are strong enough to handle these unintended circumstances”  Your local pregnancy center reaches these girls by building relationships and surrounding them in love and acceptance from the moment they find out they are expecting.

There are so many ways to get involved:  with your prayers for these girls, for your center.  By volunteering at your local pregnancy center – maybe as a client advocate,  or help fold the thousands of paper pamphlets that go out weekly.   Maybe you don’t really have a lot of time to donate, but you do have the financial resources. Your $30 each month could provide about a weeks’ worth of pregnancy tests at your local pregnancy center.

Some of us are called to protest, and stand outside an abortion clinic.  Others are called to a gentler, kinder support, like your local pregnancy center.  At Community Pregnancy Center we peacefully reach out to the young women AND men who need to know they are valued and can do all things through Christ who strengthens them.

“Learn to do good; seek justice, correct oppression; bring justice to the fatherless, plead the widow's cause” Isaiah 1:17
Posted by Bobbie Zamminer at 11:31 AM

Bobbie Zamminer
Pasadena, TX, United States
I am the Executive Director at the Community Pregnancy Center of Pasadena, TX. These girls are worth noticing, so thank you for reading their stories! Please feel free to email me at bobbie@cpcpasadena.org